by killinthegriz4
For long time readers of this forum, I have on occasionally posted a graphic of the win-loss record of MSU Football. Attached is the current one. One of my last posts was in regards to the Cat's program to see a 32 game skid after picking a new coach. That did happen. Now the projection is to a sustained trend higher. The position of the program is one where a National Championship "could" occur this season or next season. When upside chart resistance is broken (which will occur with a win 12/6/19), a sustained trend could occur before the next loss. The football program has not won 8 games in a row very often in its history. The few times it has, has most often led to a National Championship (Rob Ash 8 game win streak was the most recent and did not produce an NC). The 2019 Cats would have to win 8 in a row to win an NC this year. There is precedence and the chart is setup for something like this.
Last year I thought we were within 2 years of a National Championship run. So let's see if that plays out.

I updated the UM Football chart and they are indeed at a point to enter a sustained win streak (many year trend). So it looks like based on MSU and UM charts, there is going to be an NC won for a Montana school very soon. The 1st school to do this most likely starts to win the Montana kids recruiting battle as well.

I see Albany winning today but either of these charts would support a win. Albany just looks like it has one more win in it first before a loss. 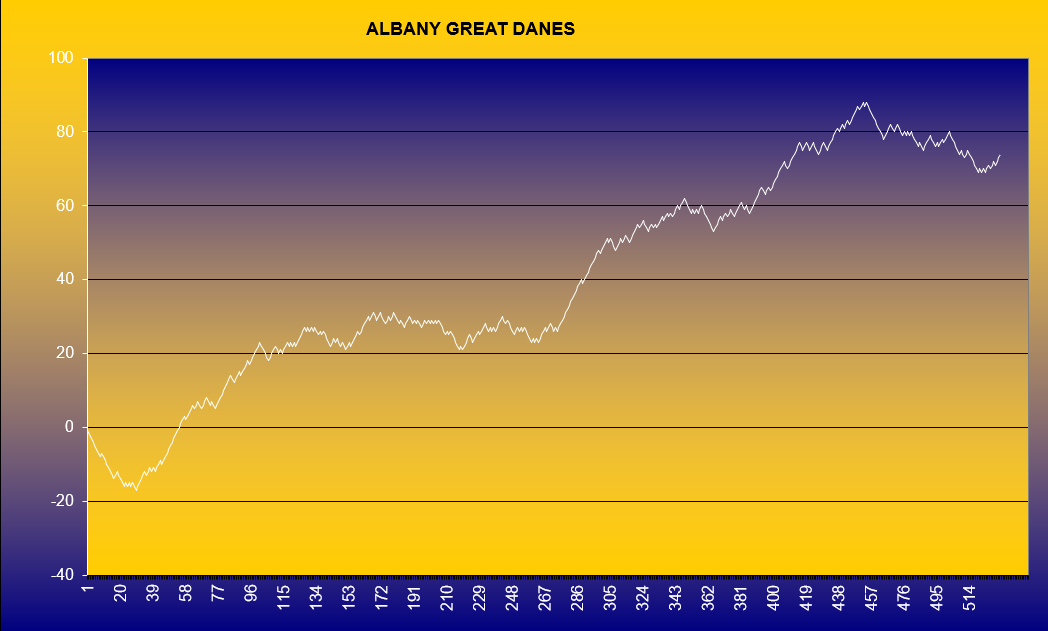 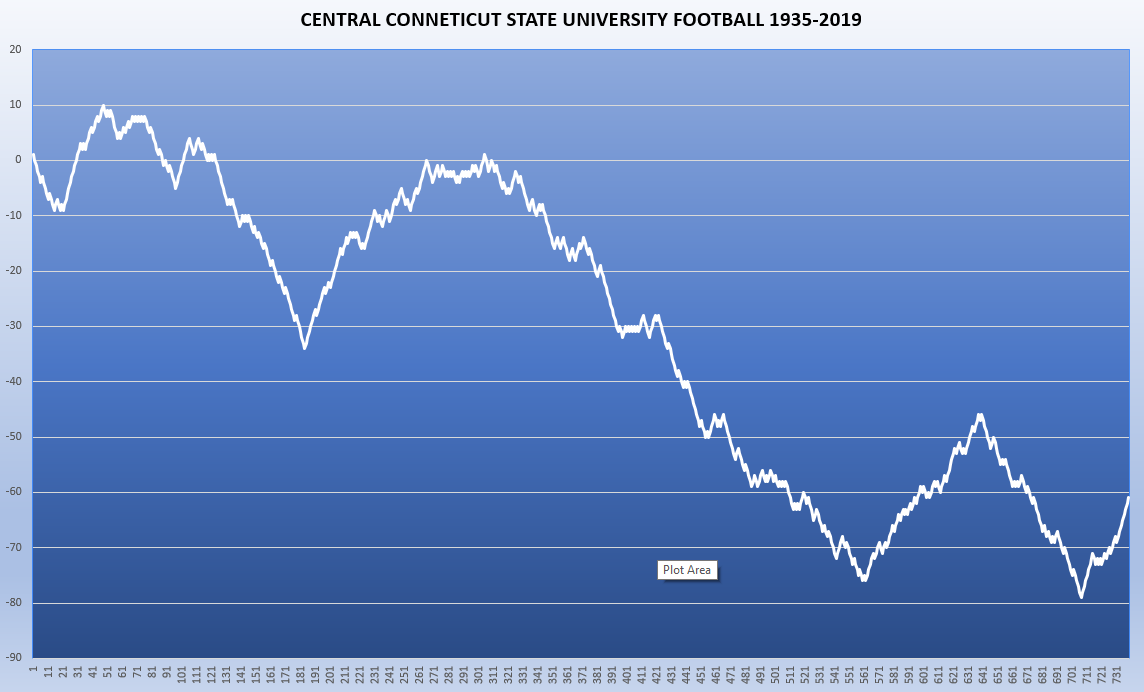 by allcat
I have no idea what these graphs mean. what do the x and y axis stand for?

You can see Albany has spent most of the time above the zero line which means they are mostly a winning program. Both MSU and CCSU have spent most of their time below the zero line...so they would be classified as losing programs. You can see there are long trends in MSU football. They are on a winning trend. There are patterns that form for long term trends and MSU entered one 15 years ago. I posted on this at the time and said that if this program was a stock, it was a major buy. The program turned around and has since been trending higher. There are certain locations where trends accelerate and MSU is at that point. MSU would have to win 16 games in a row to get up to the zero line. When MSU gets to zero again, this time it will not turn and head to the basement. There may be a corrective phase/consolidation near the zero line, but I don't expect a very long one...it doesn't happen here in the pattern.

by killinthegriz4
So far so good on the analysis.
When you look at MSU Bobcat Football program you can go back to the 1976 National Championship pattern. They are in that zone. With one more win, they enter the vibration of the 1984 NC program as well. Pretty strong vibrational period for the program right now.

I've updated the chart below.
I've also included the NDSU Football program chart. Some will say you can't predict losses in the program....but you can. They are VERY close, if not at, 1-2 losses then up for about 6 games then they will enter a pretty upward sloping choppy pattern for about 3--4 years. One would only have to study the UM Football program to see a smaller scale vibration comparison of rallies and "declines" and how they manifest.

If the Cat's continue to play as solid as they are playing and keep their heads on their shoulders, I don't see any reason why they can't fulfill the National Championship projection this year and possibly next year as well. This program has entered a different vibrational rate as I mentioned previously so the wins will be more frequent than losses for many, many years. Good luck! 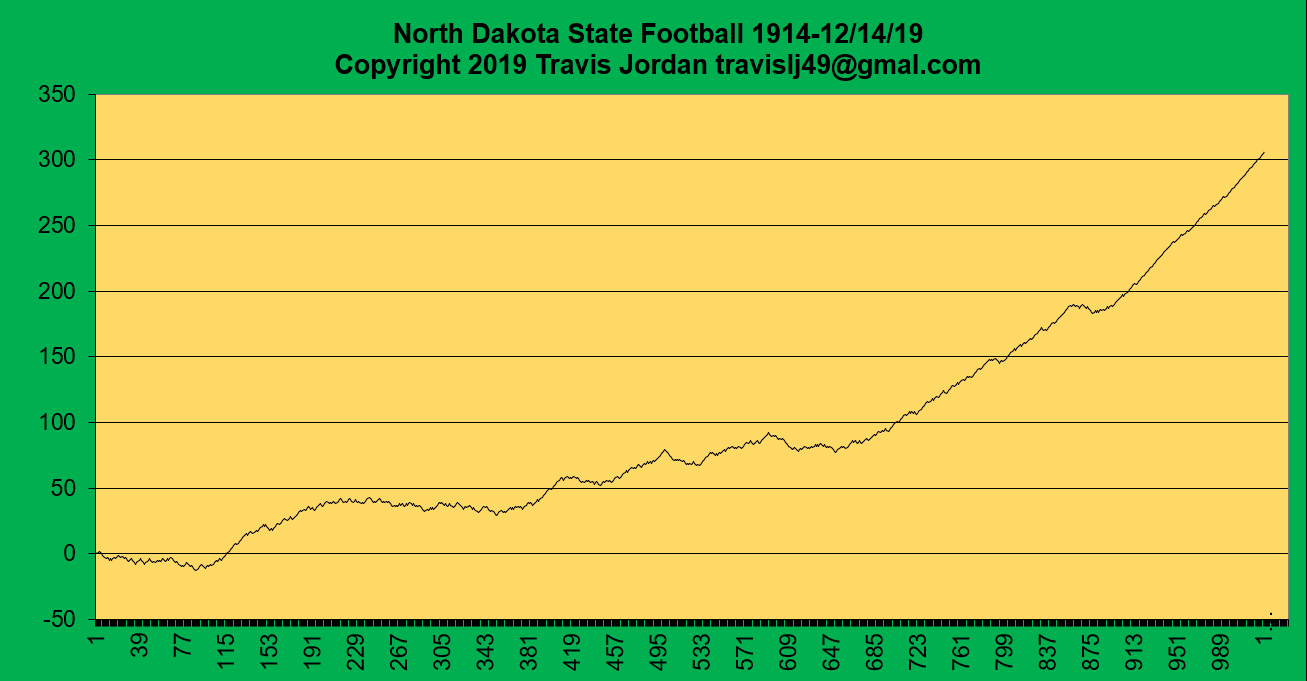 by Rich K
These graphs remind me of the ones that were used when I purchased that course (about 25 years ago) that was going to allow me to become incredibly wealthy trading stock options. I still have a day job. Still a lot of fun to project.... thanks.
All times are UTC-06:00
Page 1 of 1